In Chinese culture, you are supposed to share your happiness with others. If something worth celebrating happens in your life, you will want to share the joy with your friends and family. There are several common events that are generally celebrated with such meals. The wedding banquet is the most common. This tradition is very similar to the Western wedding reception, but normally without the wedding ceremony first. Couples often go all out for these wedding banquets, often inviting 200-300 guests and reserving tables at the finest hotels and restaurants. This is a massive business in China and restaurants cater to it. They offer special menus of dishes with romantic sounding names and a hefty price tag.

Similar celebrations are held after having a child when he is one month old (after the one month rest period mentioned above) and often times again when he is one year old. The child is formally introduced to everybody as the new parents and grandparents strut about gleaming with pride. One grandfather my family knows held such a celebration for his grandson. He said that it was the most important day of his whole life. Those who attend these feasts are expected to take gifts of lucky money to give to the hosts. This ends up being an effective way to pay for the lavish banquets. Some younger Chinese may not want to invited to these kinds of events (especially for more distant acquaintances) since the lucky money you give out can rack up fast.

Smaller meals are held for closer friends after receiving a job promotion, buying a new house, or other similar glad tidings. For these more intimate gatherings, it is normally not necessary to give hong bao, probably because the cost is much lower. 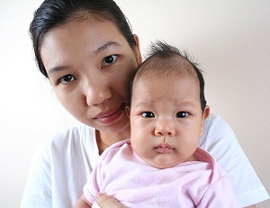 According to Chinese tradition, women should take one month of rest after giving birth. This tradition goes back 2000 years. The theory is that the body has been weakened by the pregnancy and loss of blood and needs time to recover and regain its former balance. Women do virtually no work during this period and spend almost all their time in bed resting and feeding the newborn. Generally either the woman’s mother or mother-in-law will come to help during this period and do all of the cooking, cleaning, and shopping.

In addition to taking lots of extra rest, the women need to eat extra healthily. For Chinese, that means soup, soup, and more soup. Chicken soup is the most popular. Another common dish is a pig foot, egg, and black vinegar marinated blend. This is considered to be very nutritious. Fried foods are strictly prohibited.

Traditionally women would also go the whole month without showering or washing their hair. This practice probably goes back to ancient China when people were more exposed to the elements and afraid of catching colds. Air conditioners, cold water, and fans are also taboo. While many modern Chinese women still keep the one month rest tradition, fewer and fewer are holding to the more extreme versions of no showering. Husbands are elated with this new trend.

In ancient China, the groom would go to pick up the bride to take her back to his home. He along with a small troupe of guys would carry a litter for the bride. The bride would wait eagerly for this event together with her bridesmaids (called “sisters” in Chinese). However, picking her up was not as easy at it sounds. It was up to the sisters to decide if this groom was “worthy” enough to take the bride. They may give challenges or tasks, or even ask for gifts before releasing the bride.

This ancient custom is still practiced in many parts of China today, albeit with some slight modifications. 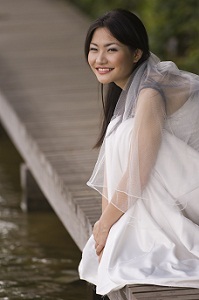 Nowadays the groom will drive a sleek car to pick up the bride. He still goes with some close buddies for emotional support as getting the sisters to release the bride can be quite and ordeal. Sometimes these bridesmaids are easy going and after a couple minutes of banter give in. Other times the groom isn’t so lucky and could face a list of demands.

Firstly, he may have to recite some love poems to prove his affection for the lovely bride. He’d better make them very convincing and do it sincerely or he might have to repeat them again. Secondly, they might propose some simple challenges to test his strength. This could include doing sets of pushups or chin ups. Thirdly, and most fun for the bridesmaids, he may to pay up. Generally the groom will come prepared with the bounty, cash in traditional Chinese red envelopes (hong bao), otherwise referred to as “lucky money”. It becomes a process of negotiation. He likely won’t give all the money he brought at the very beginning in case they demand more. The bridesmaids have lots of creative ways to try to up the ante, most popular being to appeal to his love for the bride: “Come on! See how beautiful she is? Don’t you think she is worth it?” Sometimes grooms have been known to get a bit flustered and lose their cool after an especially long negotiation, but normally it is a lot of fun and there is a lot of laughter, along with a few blushes.

If you think these cultural traditions are interesting, be sure to check out our list of 5 culture shocks of living in China.

The Chinese Lunar calendar goes in 12 year cycles. For each year, a different animal is assigned. For example, 2011 is the year of the rabbit. If you are in China, you might hear Chinese ask you what animal you are or tell you they are a monkey, ram, ox, etc. Most Westerners are at least a little bit familiar with the Chinese Zodiac. But most don’t know about Ben Mi Nian.

Ben Mi Nian will come once every 12 years. The first time is 12 years after you are born. The second is 24 years after and so on. Say for example, you were born in 1987, then 2011 is your Ben Mi Nian. According to Chinese tradition, a person needs to wear red undergarments during his Ben Mi Nian, especially during Spring Festival. These red garments are believed to bring good luck and prevent bad luck. Like most Chinese customs, this varies greatly from place to place and family to family. Some families pay no attention to it. In others, parents require their children to wear it. The younger generation doesn’t really believe in the whole idea that red underwear will bring good luck, but sometimes does it anyway to appease their parents. My colleague told me he is in his Ben Mi Nian now. His parents did believe in this and made him to wear the red underwear. He was quite glad it was only necessary to wear it during the Spring Festival. 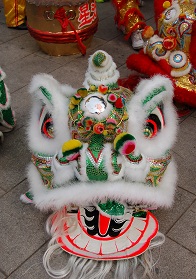 The lion dance is one of the most famous Chinese cultural traditions. While they are held during festivals, you can hear the percussions from a lion dance reverberating through the air all year round. They are held when opening a new company, or commencing an activity. These dances are believed to bring good luck and prosperity and drive away evil.

The dance begins with the lion waking ritual, where the eyes of the lion are opened. Lettuce and celery are hung up on the doorway of the new company. The Chinese sounds for these words are similar to the sounds for profit and diligence. Lucky money is attached to the lettuce as part of the pay for the lion troupe performers. Professional lion dance companies offer this service and there are different prices for different levels. Most dances will include at least two lions, a drummer, and a cymbalist. Each lion includes two people, who use their feet to imitate the lion feet’s movements. Exceptional dancers get much higher pay and they might engage in riskier movements such as dancing on the top of narrow pillars. Elite Chinese lion dancing bands truly boast a remarkable amount of flexibility and skill, which takes years of practice to hone. If you are in China keep your ears pinned for drums and cymbals so that you can head over to take in the show for yourselves.