How to Make a Chinese Wall Scroll

The art of Chinese calligraphy is almost as old as China itself. Yet calligraphy is done on rice paper, which is very fragile and easy to get wrinkled or rip. For millennia experts at another craft, scroll making, have solved this problem. By turning the calligraphy into a wall scroll, it can be preserved from generation to generation. This process also turns a piece of paper into a beautiful decoration that can be hung up and enjoyed every day. It takes days to properly make a scroll and is extremely delicate work, needing the agile hands of seasoned experts.

The process started as far back as the West Han dynasty and has advanced over time. Archaeologists found scrolls from a Han tomb still preserved well. The Song dynasty was famous for the prosperity of the art created during it. During that time, a number of methods for designing the silk scroll edging were popularized. Later an emperor reigning in the Yuan dynasty established a department for scroll making. Ming and Qing dynasty scroll makers began using all types of colors and brocades for the edging. There were almost as many methods and styles as shops, but could generally be separated into two categories, Northern and Southern. Eventually the technology passed into Korea and Japan, who adapted it to their own local cultures. Ancient scroll making tools can be found at many museum displays around China.

Below is a picture series of the entire scroll making process. The workshop should be well lighted with good ventilation. The work desks are made of wood, painted with scarlet paint, and well polished. There is a large drying wall, for hanging up wet materials to dry on. 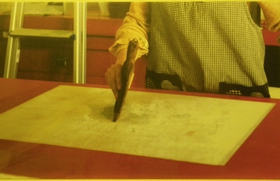 Step one: Put the glue on the back of the art and the backing paper, making sure it is smooth with no lumps. 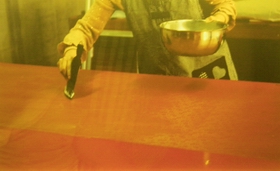 Step two: Brush water onto the edging silk/brocade. Use a towel to dry off excess water and then apply the glue over the top. 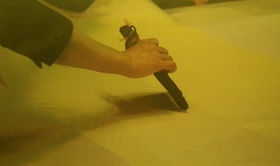 Step three: Stick the art and the backing paper together. This is the most delicate and tedious step. Extreme care has to be taken to make sure there are no air bubbles or pockets of glue between them. It takes years of practice to be able to do this quickly. Beginners often grow frustrated and give up after trying hours to make one successfully. 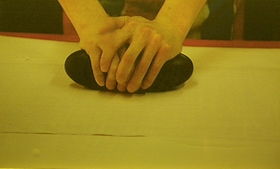 Step four: Use the cobble stone to press the two piece paper together well. Otherwise the art may eventually separate from the scroll.

Step five: Choose the color and design of edging desired. Cut it to the right size and glue it on. 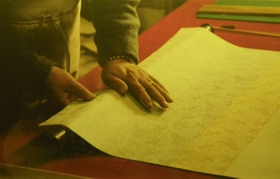 Step six: adhere the scroll to a wooden roller. This enables the art to be transported or stored safely. It also causes the scroll to hang straight on a wall. 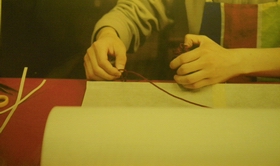 Step seven: Attach a hanging cord on the top. The cord is called “startle the swallow”, because when you hang the scroll up in the wind the cord will fly and startle the bird.

And finally you can sit back with pleasure knowing that your hard work and skill have created a beautiful piece of art that can be enjoyed for generations. A finished Chinese wall scroll!