Having lived in China for 16 years and being married to a Chinese for most of that time, I have had a lot of exposure to Chinese culture, customs, and traditions, mostly in Southern China. Every culture around the world has its own interesting quirks and China is no exception.

Fact #1 – Chinese go to the hospital for everything. There are no personal family doctors. When I first came to China this came as as a surprise. My friends would tell me they have to go to the hospital. I thought they had a serious illness or disease. But it turns out most of the time it was a common cold or flu bug. Still whenever I have a cold someone will invariably ask me if I am going to the hospital and I have to remind myself that hospitals are the only place to go for medical care, no matter how small. It’s no wonder they are so popular. To register and get a consultation with a doctor (often times Master or P.H.D. program graduates) costs between $0.25 and $.0.75!

Fact #2 – Driving has a whole different set of rules here. No doubt if you have been in China before, you know that taking to the roads can be a heart stopping experience. At the beginning of my time in China every single trip across time would present five to ten moments when I thought there was no way the driver could possibly avoid a crash. My friend told me that in China if you let other drivers in, then you will never get where you are going. There is just a continuous stream of vehicles. The rule of right of way is “whoever gets their bumper in first has it!” After several years in China, I now find myself upset if the driver is slow and doesn’t race through traffic changing lanes. Lest you think that Chinese drivers are poor, think again. They go through rigorous and costly driving lessons far more difficult than what the States puts its drivers through. Drivers here have lightning fast reflexes and can stop on a coin if a pedestrian gets in their way. 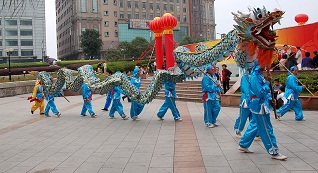 Fact #3 – Want to know the biggest migration in the world every year? It is not birds going south or arctic reindeer, it happens right here in China. Each year at Chinese Spring Festival roughly 230 million Chinese city workers head back to their hometowns to celebrate Chinese New Year. Ticket prices soar and public transportation turns into a sea of people (d::e11d::f57o<ren shan ren hai in Chinese, people mountain people sea). One reason for this mass migration is that China institutes a 15 day nation wide holiday. Actually China has four or five public holidays every year when everyone gets off at the same time. Because everyone is off at the same time, everyone travels at the same time. This is in stark contrast to America, where nationwide holidays are short and workers have a lot more discretionary time off.

Fact #4 – China boasts one of the highest percentages of male hand bag carriers in the world. Whereas top brands like Gucci and Prada cater to women in Western countries, they are starting to realize the importance of targeting men here. The reason so many Chinese men carry expensive handbags is simple. The highest denominations of Ren Men Bi (Chinese Yuan) is 100. That is the equivalent of about $14. Checks aren’t used and cash is. This means that large wads of cash are carried about as a must to conduct business. Wealthy businessmen buy these handbags to put in piles of cash. Also Chinese guys will cheerfully carry their wives or girlfriends purses and handbags. Sometimes you can catch sight of a burly gym rat carrying a bright red handbag with hearts on it, quite a sight! 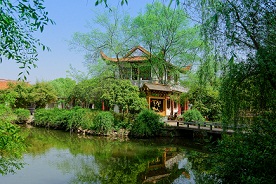 Fact #5 – Elderly people in China have a completely different lifestyle than their Western counterparts. Early in the morning you might hear music drifting in your apartment window. It is probably women (and a lot of men too!) who have gotten up early to dance. Parks, local complexes, and sports stadium grounds are filled with public dancing. It is a great form of exercise as they really get into it. Besides that many occupy their time with social exercising, jianzi (kicking a weighted shuttlecock in a group), Tai Ji, or Ma Jiang. I have found that most elder people in China keep in great shape because of their daily exercises. Many times they will walk backwards or tap their biceps or other body parts to loosen up and keep limber.

If you have been or are going to China, Chinese calligraphy art makes a great souvenir.