The Chinese bamboo tree is one of the most famous symbols of China. Asian people have respected the qualities of bamboo and appreciated its beauty for thousands of years. Ancient Chinese designated bamboo as one of the four “gentlemen of the year” along with the orchid, plum, and chrysanthemum. It is considered to be a symbol of good fortune because of its quick growth and a symbol of longevity because of its long life span. The giant panda consumes bamboo as its primary food source and dwindling bamboo forests is the main cause the panda is endangered today. Historically, the people of China made great use of it and this is perhaps one reason why they value it so much.

Perhaps the most important use of bamboo in history is its part in the invention of paper. Paper was invented by Cai Lun in 105 AD. He mixed Chinese bamboo plant fibers with pulp from a mulberry tree used water and then strained the material to make the first paper. This is one of China’s four great inventions.

Chinese Products Made Out of Bamboo

It was also used for a host of other inventions. Almost all ancient Chinese instruments were made from bamboo, most notably the Chinese bamboo flute (dizi). Some of the many products made 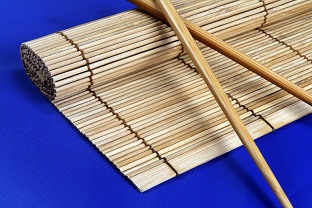 Amazingly, the resourceful Chinese found another use for bamboo, food! Tender bamboo shoots are stir fried together with any number of other ingredients to make delicious and nutritious dishes. The leaves of some species can be used to make a kind of tea. And even bugs that live in the hollow interior are considered a delicacy in some regions.

In modern day China, people still use bamboo for many of the same things as in ancient China. Many people sleep on bamboo mats at night since they are considered much cooler than Western mattresses. If you walk through any city here you are likely to see bamboo erected as scaffolding on every street corner. A net is stretched around the scaffolding to provide a safe environment for construction.

Bamboo grows faster than any other plant on earth. Legend says that sometimes is grows so fast you can hear it! Some shoots have been recorded to grow almost four feet per day. In only one season, bamboo can reach its full mature height, sometimes 100 feet (30 meters) tall. Not all grows so tall, however, as the smallest bamboo species maxes out at less than one foot. 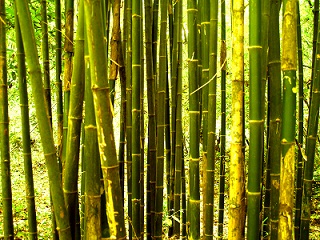 There are nearly one thousand species of bamboo in the world, almost allof which are native to Asian tropics. One species is native to the United States.

The bamboo you see above the ground looks like hundreds of individual plants. It isn’t. It is part of one system. The roots spread underground and launch shoots upward. This is why you will normally see bamboo clumped closely together in groves.

Bamboo has a long lifespan, which is one reason it is so treasured in the Orient. Some species of bamboo live to 120 years old.

You will almost never see bamboo blossoming. The reason is that it only blossoms in the middle of the night when no one is looking. Not really. Actually some species of bamboo take more than one hundred years to flower. This uses a lot of energy and sucks the precious nutrients. Generally, the grove will weaken and die shortly after blossoming.

Because of its beauty and treasured place in Chinese culture, 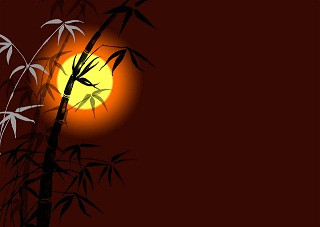 bamboo is often featured in art, both ancient and modern. Bamboo, mountain backgrounds, plum trees, and water are the four most common backgrounds used by Chinese artists. It is easy to see why people appreciate the elegant, yet powerful bamboo. If you would like to add a touch of Asian beauty to your house with bamboo, you have come to the right place. Our expert Chinese artist makes custom calligraphy bamboo scrolls and Chinese bamboo art. You can have a Chinese Proverb calligraphy scroll, your name in Chinese, a custom phrase, a Christian virtue, or a Bible verse scroll all with hand painted bamboo art in the background. Just visit our main calligraphy art page below or one of the links on the right to start browsing.