In ancient China, painting and calligraphy was done on silk or cloth. Nowadays people normally use Xuan Zhi (rice paper) for traditional calligraphy. The properties of rice paper are well suited for absorbing the ink and making attractive strokes with Chinese calligraphy brushes. There are two kinds of rice paper, "sheng xuan" (processed rice paper) and "shu xuan” (plain rice paper). Sheng xuan is normally used in Chinese calligraphy to write neat characters, because the ink will not seep out over the paper. Shu xuan is better used for painting, as the water colors spread away from the brush stroke. This gives the artists more freedom in exploring different colors and shades. If you are not sure which kind of paper you are using you can perform a simple test. Drop one drop of water on the rice paper. If it spreads out it is shu xuan and better for painting. Sheng xuan is comparably hard and crispy and the water will not seep out as easily. This pack of rice paper is an affordable option for honing your skills.

Chinese calligraphy requires a special ink available in many hobby stores or for purchase online. This ink contains special ingredients that make it easy to dry, water proof, and give it a strong color that won't fade over time. Be sure not to leave the ink out a long time or it will dry out.

How to hold the brush:

The palm should be hollow, big enough to hold an egg. The fourth and the last finger shouldn't touch the palm. Use fingers to move the brush, but use strength from your wrist and elbow.  The brush should be perpendicular with the rice paper, while your wrist should be horizontal to it. When you wrote small characters your elbow can be placed on the table for support. When writing larger characters, the elbow should be off the table.

There are two basic postures for writing Chinese calligraphy, sitting and standing. Sitting is normally for small characters, and standing is for large ones. Regardless of your exact position, it is imperative to have good posture and keep your back straight. A common Chinese saying says that the best way to learn patience and good posture is by practicing calligraphy.


How to write Chinese Calligraphy

There are scores of Chinese calligraphy styles. The one featured on this site is “li shu.” This style features very neat strokes, each one crisp and clear. Each character can fit uniformly inside a square. If you try this style, make sure to use plenty of ink so that each brush stroke is full. Also, curves should be gradual and slow. 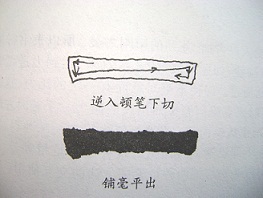 Chinese calligraphy employs a different method to make sure the edges are full. Start about 15% off of the extreme left side, take the brush to the left end where you want the stroke to end and then gradually turn it back right. Use the same method for the endings (left and right, top and bottom) for every stroke. So the shape of each stroke resembles a figure eight. The edge of the calligraphy stroke can be either rounded or square. One important Chinese calligraphy rule to remember states that a character should not be written in the same style (round or square, plus many other variations) in one passage. Expert calligraphers will vary each character within the style they employ..

This ancient Chinese art form takes years of faithful practice to attain elite status. But you don't have to be expert to have fun with Chinese calligraphy. Get the basic materials and start to experiment with your own style. Beginners often use a gridded "magic" cloth to practice on. You use water which will evaporate away after you are done so it can be re-used many times. The most important thing is to keep practicing. Calligraphy requires great patience, focus, and discipline. But it is well worth the efforts. Not only can you call yourself an Asian calligraphy artist, but you will also find that practicing Chinese calligraphy can help you learn valuable character qualities, which will spill over into other aspects of your life.

About the History of Chinese Calligraphy

5 Taboos to Avoid in Chinese Culture

View Some of Our Custom Chinese Calligraphy Scrolls and Art

Home Site Map Contact Us Links Testimonials About Us FAQ